Nicholas Thompson (WS 1999 - 2006) ran the Shakespeare Marathon on Sunday 8 May to raise money for the New Futures Orphanage in Cambodia.

In 2010 Nicholas went travelling in South East Asia and, during that time, visited Cambodia where he worked as a volunteer at the New Futures Orphanage in Takeo Province, south of Phnom Penh. The time he spent at the orphanage made such an impression that he is raising money to help them. In May, Nicholas and his father Paul ran the Rotary Shakespeare Marathon in Stratford.
Neither Nicholas nor Paul has ever run before and, while the training was hard, it is nothing compared to the heartache that some of the children in the orphanage have been through.
Nicholas and Paul aim to raise £5,000 for the orphanage and its associated rural schools (1,250 children in all). Here are just some of the things that will be done with the money:
£1 will pay for schooling for one child for one month.
£4 will feed a child for a week.
£250 will send a child to university.
£1,200 will build a rudimentary village school.
£1,500 will fund the orphanage for one month (all the bills and rent).
£1,500 will buy three ‘Tuk Tuks’ which can be used to ferry children to school from some of the more remote villages and also raise money locally.
If you would like to know more about the orphanage and what else New Futures do, please visit their website: www.newfuturesorganisation.com.

All of the money raised will go directly to the orphanage.
If you would like to donate even a small amount of money it will be greatly appreciated.
Any donations can be made via www.justgiving.com/thethompsontwins In 2010 I went travelling in South East Asia for several months and during this time I visited Cambodia. While there, I worked as a volunteer in an orphanage. I have to admit that I was more than a little apprehensive about what I would see and experience; I need not have worried. The children were so friendly and welcoming that I never once felt uneasy. It is very difficult to encapsulate the whole experience in just a few paragraphs but one short story might help to illustrate the wonderful work done by the team at NFO (New Futures Organisation). 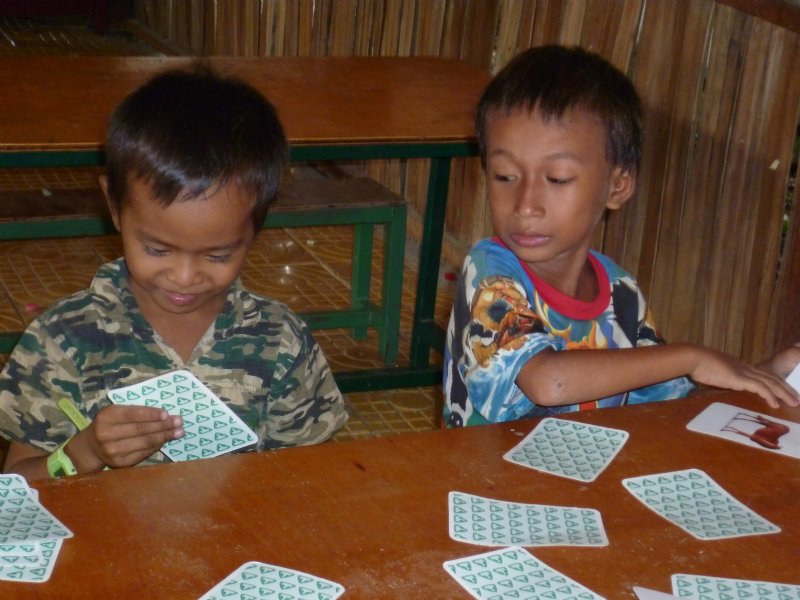 I met a little boy called Tee, he was about six years old but no one is exactly sure. Tee had spent two years locked up underneath his father’s house and was eventually ‘rescued’ by his uncle who brought him to the orphanage. Not long after arriving Tee cut his foot very badly. One of the staff cleaned the wound with antiseptic which would have brought tears to an adult’s eyes, let alone a child’s, but Tee did not cry. He had been so terrified by his father that to be seen crying would have brought even greater pain at the hands of his father or sister.

Six months on Tee is so much better, as you can see from the pictures. I particularly like the one of him cheating at Snap! Unfortunately when I left Tee had been suspended from school for stealing the teacher’s apple. I am reliably informed that he has now been allowed back! When I departed, as well as promising to return, I also promised to raise money for the children.