Congratulations to our Old Warwickian rugby sevens, who won the Public Schools’ Old Boys’ Sevens Tournament on Saturday 19 June 2010.
(Thanks to Simon Doherty (WS 1992-03) for the following report). 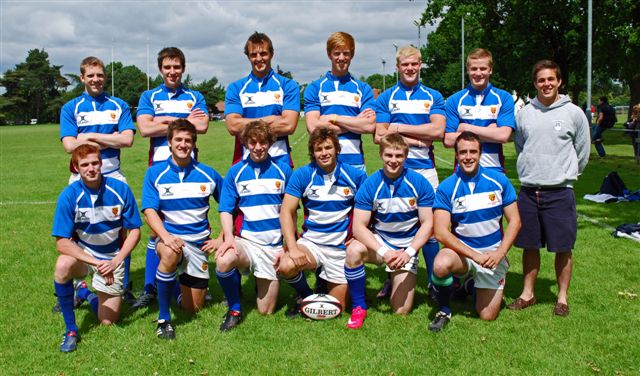 The event was held at the Old Silhillians Rugby Club to coincide with the 450th anniversary celebrations of Solihull School, and brought together many of the heavyweight names on the schools circuit from across the region and beyond.

The OW team was comprised of players from a number of different age groups, from recent leavers such as Sam Miller (2009) right up to the ‘veteran’ of the squad, James Horton of the 2001 Warwick vintage! All donned the school colours though with the same thought in mind; to make the most of the superb conditions and play some expansive sevens against the old rivals.

The opening pool match saw OWs run out 21-12 winners against Old Monmothians, with a somewhat nervy finish causing a few nerves to jangle in what had otherwise been an excellent display of running rugby. This was, however, to prove the closest that any side got to the OWs, as wins against Old Rugbeians (27-12), Old Wheatleyans (45-0) and Old Silhillians (35-19) placed the team top of the pile in Group 1.

A tough draw against the much-fancied Millfield Old Boys in the Semi-Finals was to follow. Following a cagey start, the speed and organisation of the OW team proved too much for the Somerset outfit, and the eventual 35-7 victory was sealed with some excellent late solo efforts out wide. Old Bromsgrovians sneaked through against a determined Old Rugbeians, in what was a fiercely contested fixture, to secure their place in the Final.

The last fixture of the day provided some of the best sevens witnessed in the tournament, with several spectators commenting that it was one of the most enjoyable games of sevens they had seen in years. Some real grit was shown by a determined OW side, grinding the opposition down before finally turning on the after-burners with two breakaway scores at the end. A 28-5 win and with it the tournament was just reward for what had been a superb performance, and a total of 191 points scored across the day (with only 55 conceded) was testimony to the flair on show!

It is very much hoped that this event will become a permanent fixture on the calendar, and that the summer sevens format will provide a great opportunity going forward for OWs to come together at a time when their other club commitments have died down.

Special thanks to Freddie Dixon for his organisation and support.