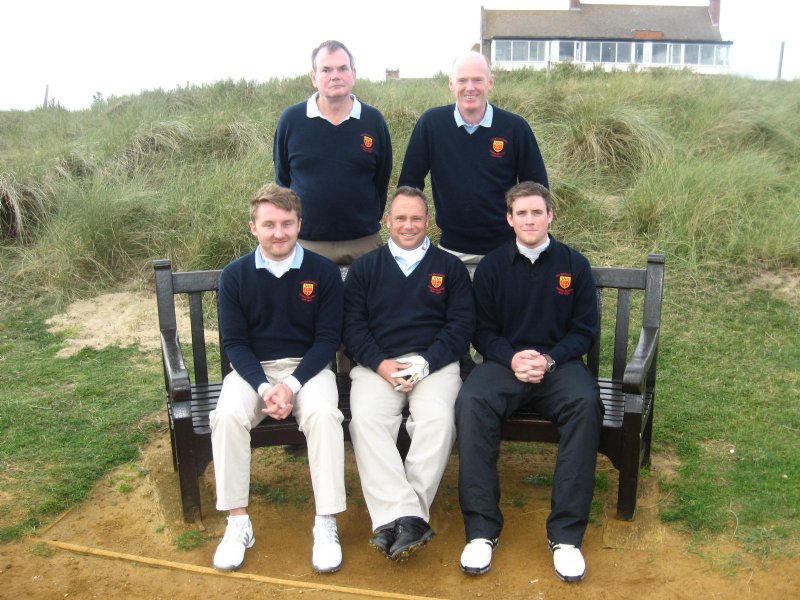 With three of the original 1985 winning GM side, we set off for Norfolk and a practice round at Hunstanton GC in preparation for this year’s Grafton Morrish Finals.

Sadly, Peter Gordon (1), one of our lowest handicap golfers, had to pull out. Steve Tubb commendably came to our rescue at the eleventh hour and arrived at the team hotel at 11pm. With the final pairs re-jigged and selected, our team expectations were high for the main scratch foursome matchplay competition.

Golf conditions were extremely tough and demanding. Our first round match was against Kings, Bruton. Charlie Higgins (1) and Matt Hicks (5) lead out, followed by Tim James (5) and Phil James (5). Julian Marcus (7) and Steve Tubb(7) held the 'anchor' role.

Our first and third matches, unfortunately, only managed to play to the 13th, losing 7 and 6 and 7 and 5 respectively. Tim and Phil found renewed 1985 vigor and saw off their opposition, winning 7 and 5. So onto the plate competition - The Solihull Salver - and a scratch foursome stableford at Brancaster GC. With Steve Tubb unable to stay for the plate, Phil Cooper stepped into the breach. The wind, apparently a remnant of a Caribbean hurricane, made golf extremely difficult again. Charlie and Matt managed 21 pts, Tim and Phil 22 pts and Phil and Julian 17 pts.

Our six GM representatives are more eager than ever to return in 2012, if only to put some demons to rest! Huge thanks to Steve and Phil, who came to our rescue and, without whom, we would have been going home earlier.