What’s in a postcard?

In one of those extraordinary bits of luck, I managed to buy over the lockdown summer, from eBay, a 1909 postcard of the Eastgate in Warwick, which had been labelled as from Durham Cathedral – and which was posted to me from Romania!

It turned out to be a chatty, beautifully hand-written card, sent from Warwick School on February 23rd 1909, to a lady called Mrs Burden in Hockley Heath.  The writer was obviously a pupil at the school at the time, and this is where the Internet detective work started – very much aided and abetted by Mrs Polly Beidas of King’s High School. 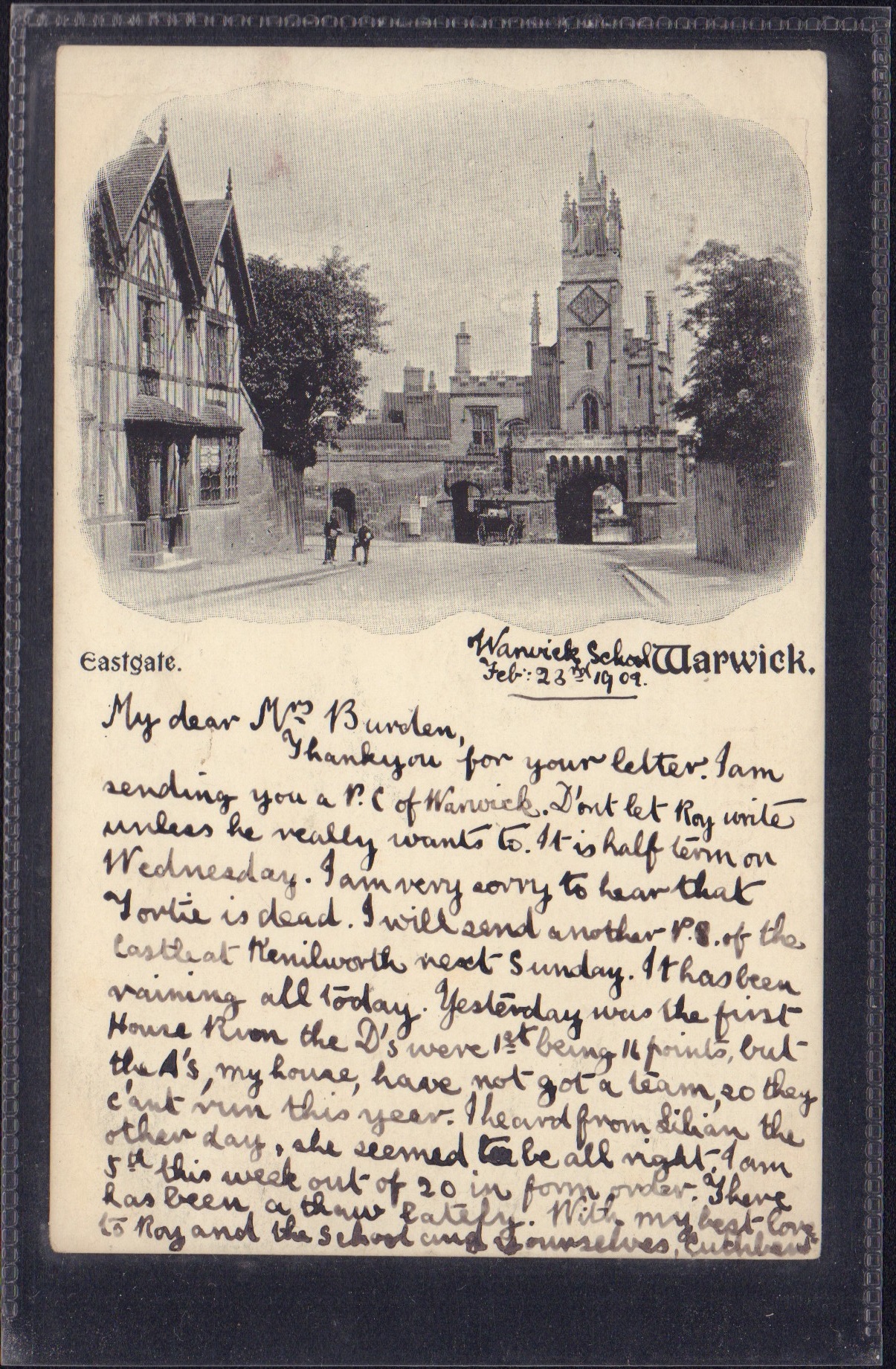 The writer signs himself off as “Cuthbert” – and there was only one Cuthbert at the school in 1909, so we know who sent it.  His name was Cuthbert Harris, and he had only, in fact, just joined the school - in January 1909.  His home in that year was in Victoria Terrace, Leamington Spa, and his father was a grocer, but the address in 1911 is given as Leam Terrace – a step up.  But here several extraordinary facts start emerging.  First, that Cuthbert, having been born on 31st October 1901, was only seven years of age when he wrote the card.  Second, his brother Alfred, almost exactly a year older, joined and left the school at the same time – but was a boarder in the Junior Boarding House.  It also became obvious that Cuthbert himself was “farmed out” to Mrs Burden, a 65-year-old schoolmistress who also took in boarders, presumably from the age of six.  He seemed to have a happy time there, sending his “best love to Roy and the School and yourselves” at the end of his postcard, although he also warned “Don’t let Roy write unless he really wants to.”  So who was Roy?  He was Roy Allin, and he and his sister Florence also boarded with Mrs Burden.  He was an American youth of about 15 - perhaps he was a busy pupil teacher?

Cuthbert writes “I am very sorry to hear that Tortie is dead”.  Perhaps this was a pet tortoise?  And “I heard from Lilian the other day, she seemed to be all right.”  We don’t know who Lilian was, but she must have also been one of Mrs Burden’s boarders.  Cuthbert then boasts “I am 5th this week out of 20 in form order.”  This was the era when promotion to the next form was based on ability, and not age – so Cuthbert has obviously had a good start in the Junior School.

Cuthbert was just 12 when he left the school in January 1914.  What happened to him?  Perhaps he was needed in his father’s grocery, and perhaps he served in this way throughout the First World War.  We do know, though, that he married a Coventry lady, Marcelle Gorton, in 1928.  But before that, in 1919, Cuthbert was enrolled in the Royal Navy, rising to the rank of Lieutenant Commander in 1932, when he and his wife lived in Devon.  Cuthbert Harris died in Colchester, Essex, in 1971, aged 70.  And what of his boarder brother Alfred?  He seems to have been the more able of the two – not only did he win school prizes in 1909 (Form II General Proficiency) and 1912 (Second Prize for French in Form LIV), but he also acted as a lady in the December 1912 production of “Henry VIII”. However, there is no trace of him after the 1911 Census.  It may be that he emigrated.  Cuthbert gets not one mention in Portcullis magazine, save for when he came, and when he left from form UIVb.  Arthur, strangely, being a year older, was only in LIVa when he left early in 1914, together with his brother.

With grateful thanks to Polly Beidas, co-author of “Of Mulberries, Ilex & Acorns” – the recently-published history of King’s High School, copies of which are still available.