A recent flurry of reminiscences from OWs, some of whom seem to be in favour of its resurrection, has prompted me to attempt to compile a history of the CCF Band.  Opinions, needless to say, vary widely, from those who remember it with great fondness to those who were less appreciative.  In 1937, in a report on the annual inspection, it was described in Portcullis magazine by “those members of staff who refer to it as "the yearning music of a god in pain".

Naturally, I turned to Portcullis to try to find out more.  There seems to be no record of its inception, nor of its demise.  Roughly the first mention comes in 1922 in a report on that year’s summer camp: “Cosserat is to be congratulated in being first in the bugling competition”.  In the 1925 camp not enough volunteers attended, so “our Band, which made its first appearance at camp for many years, was too small.”  There is, however, a photograph of this noble little band: 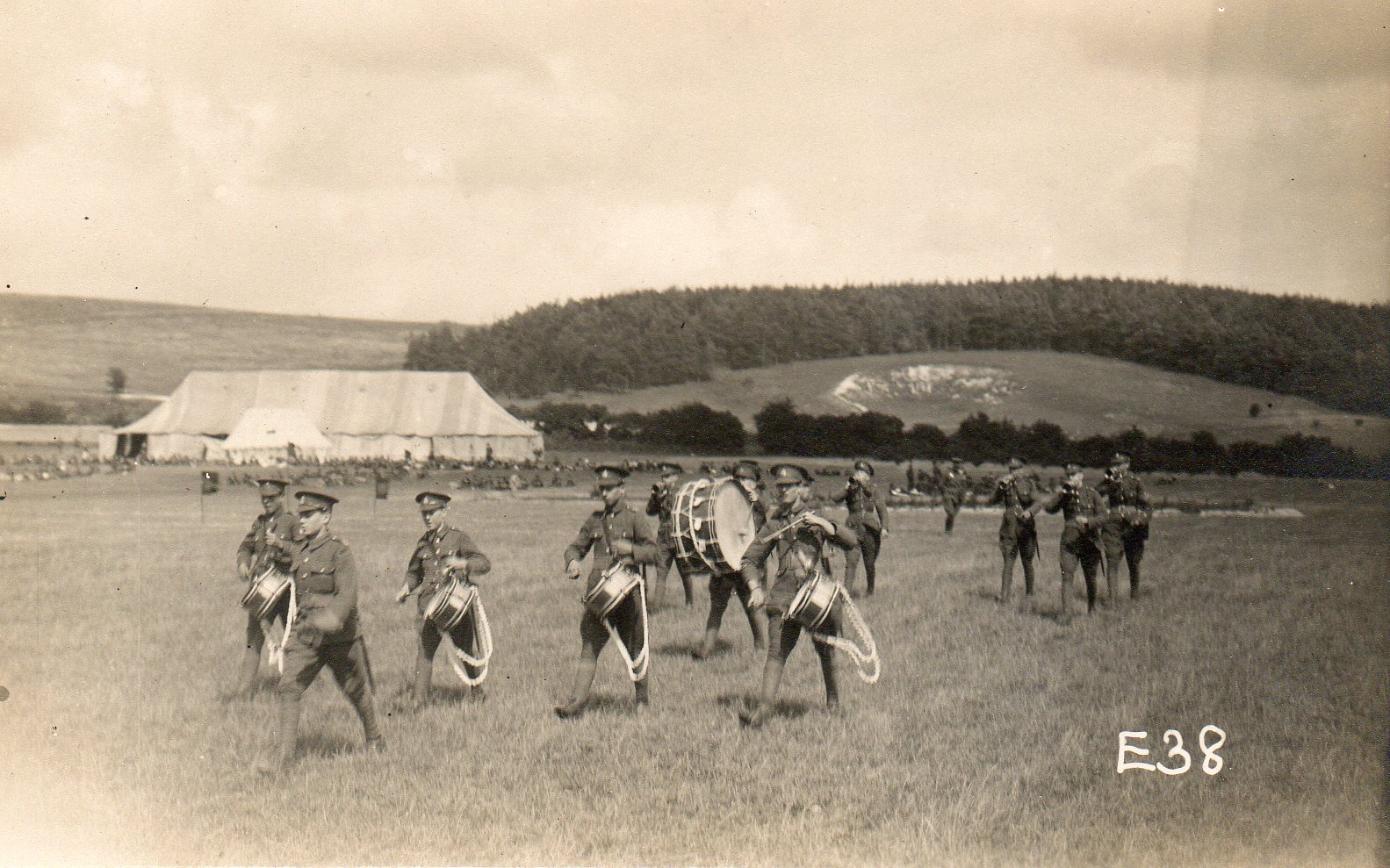 The Inspector of the 1928 Band reported: “There is a self-taught Drum and Bugle Band – well-turned-out and quite good.”  In December 1933 a subscription was proposed “for drums to replace our twenty year old kettle drums.  The Band is now equipped with six regulation side-drums it so thoroughly deserved.”  The following year, in 1934, it was proposed “to create a fund for the upkeep of the Band instruments.  It has been decided to make a charge of two shillings a term to each member of the Band for the excellent instruments we now possess.”  In the 1936 camp, the Warwick School band was placed fifth in the competition over the entire camp. 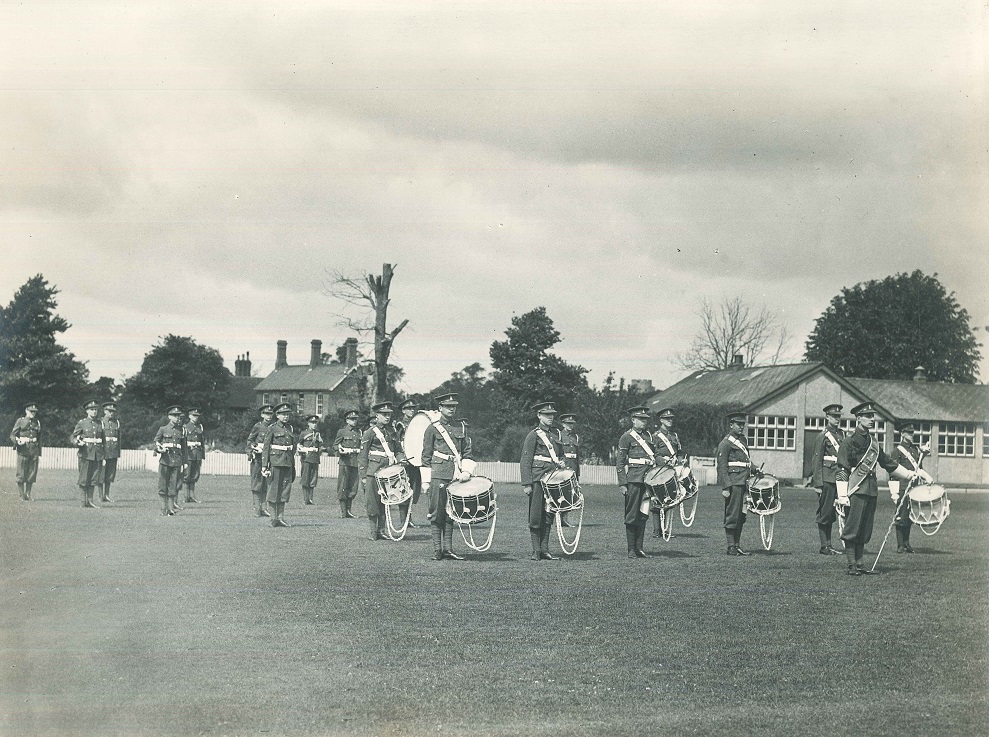 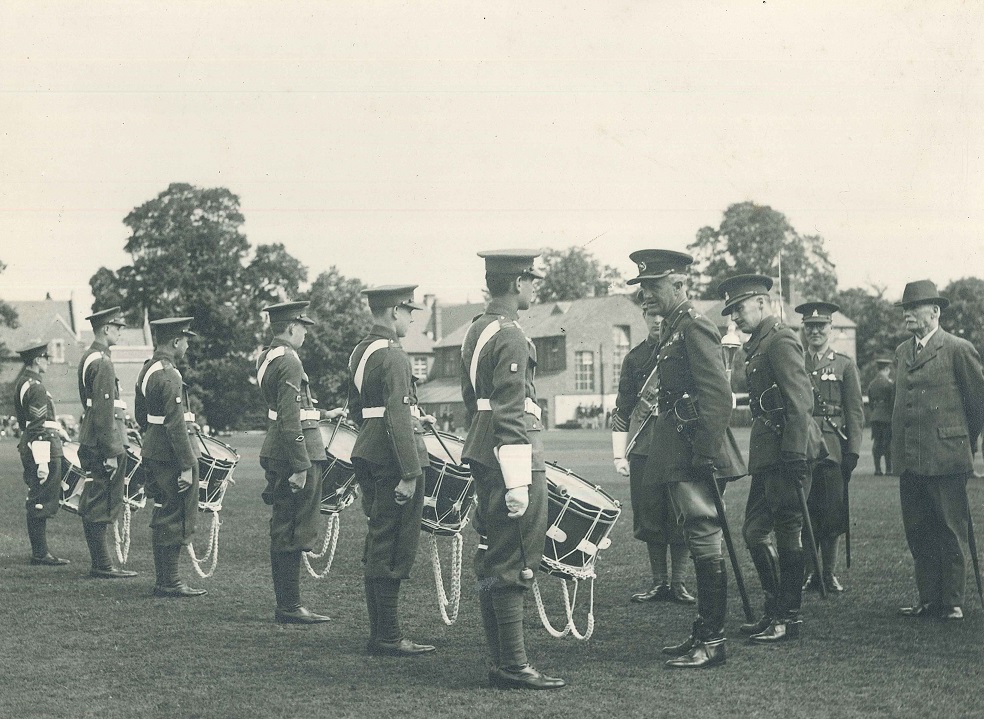 In this superb photo of the 1939 OTC Band, we see that there are eight side-drums and one bass drum, and up to ten buglers.  Two of the drums are painted with the school crest, and “Warwick School OTC”. 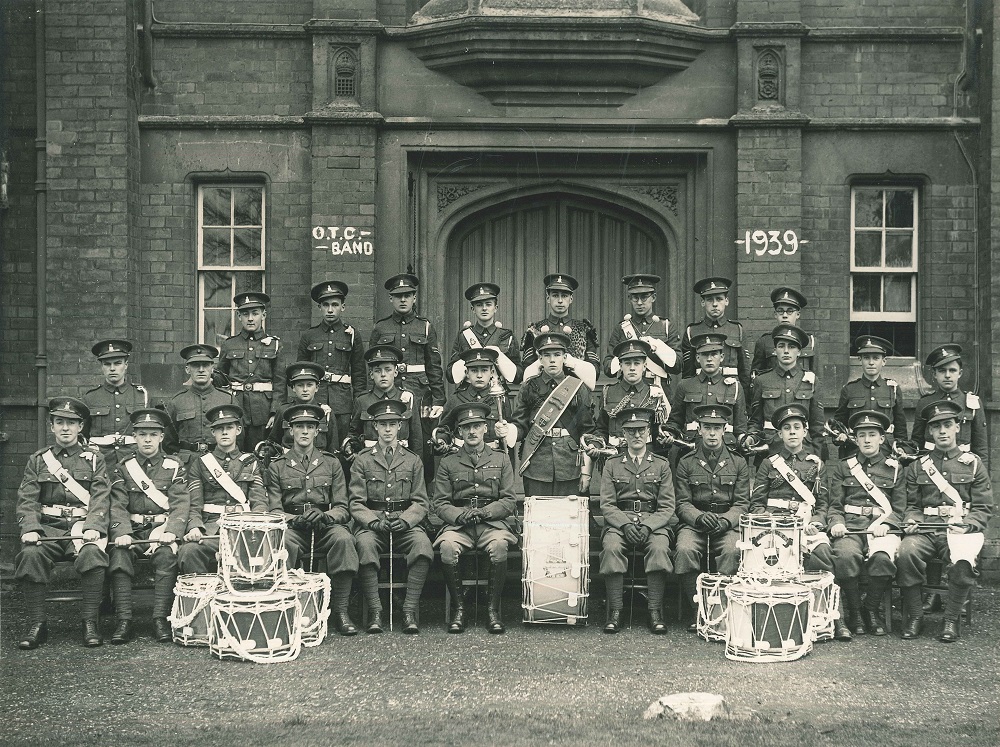 On 6th June 1947, Field Marshal the Viscount Montgomery of Alamein, Chief of Imperial General Staff, reviewed what was then called the JTC, or Junior Training Corps.  “After reviewing the Corps, he inspected the Band; he asked about one of the prize bugles and signed the big drum.”  The first blower of that particular bugle was the future Olympian, A. G. K. Brown. 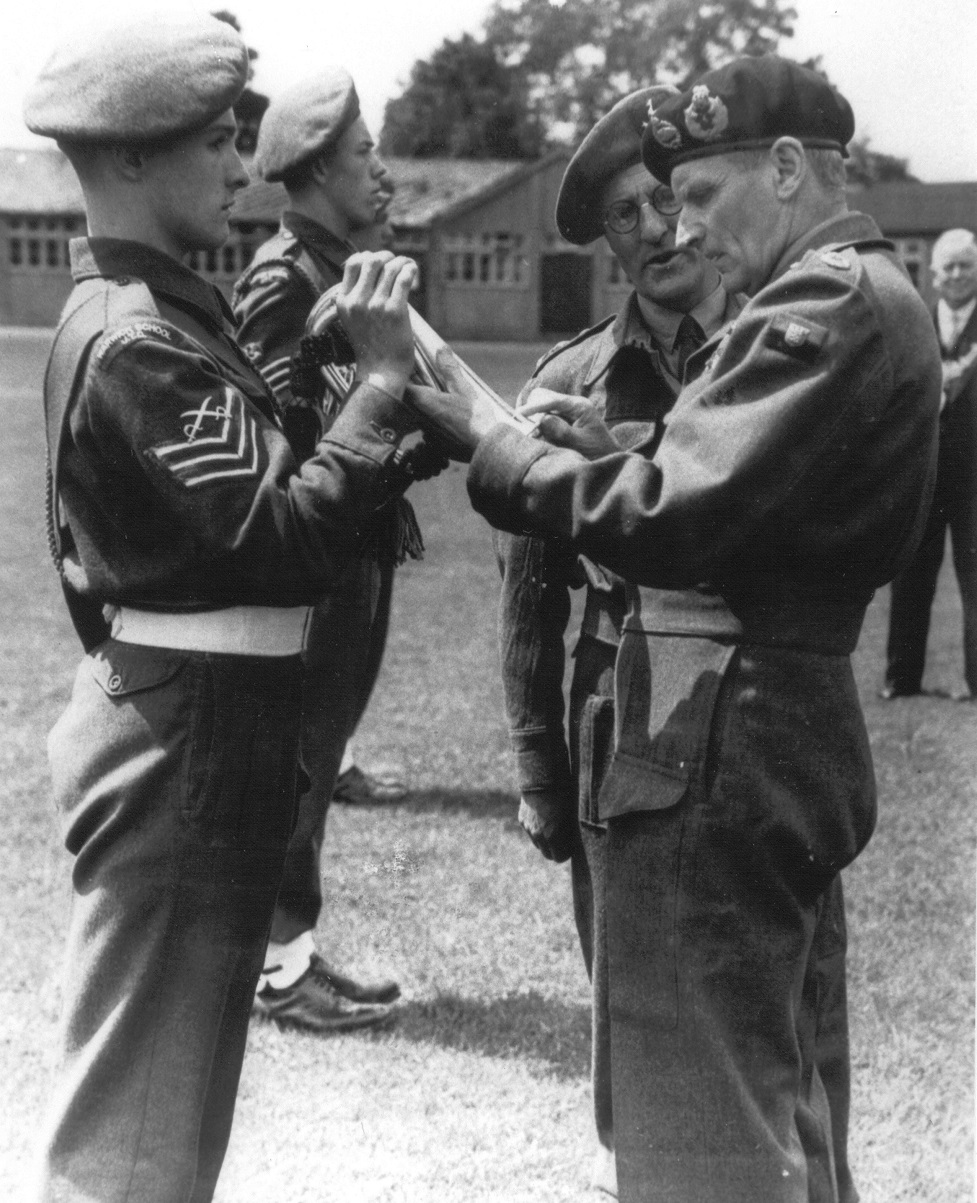 The school regularly supplied buglers, as in this photo announcing the Queen’s Accession in 1952. 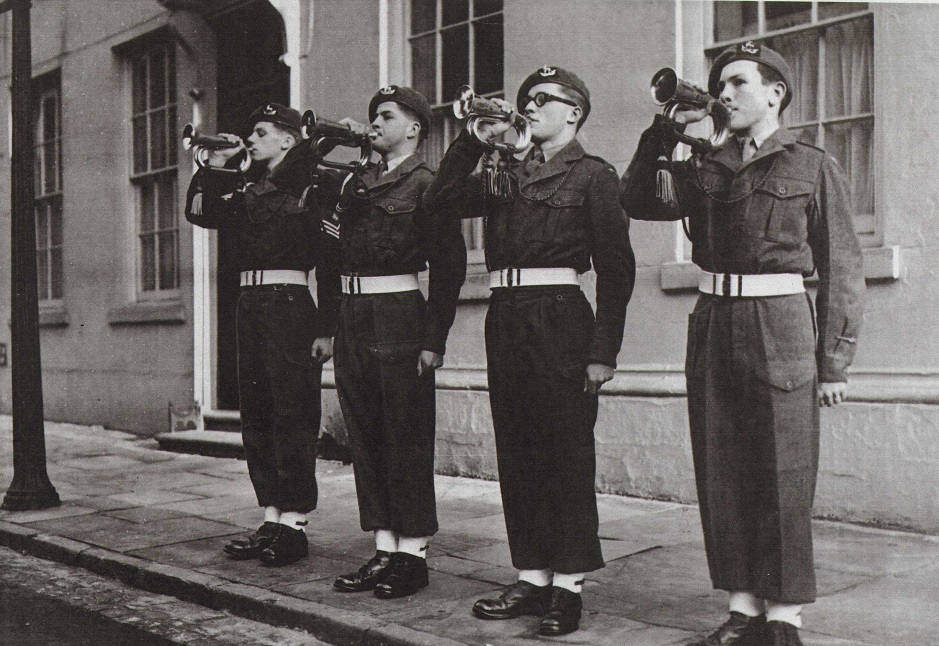 From the same year, 1955, we have a photo of the Band on Church Parade, marching down Jury Street after the annual Remembrance Service at St Mary’s Church. 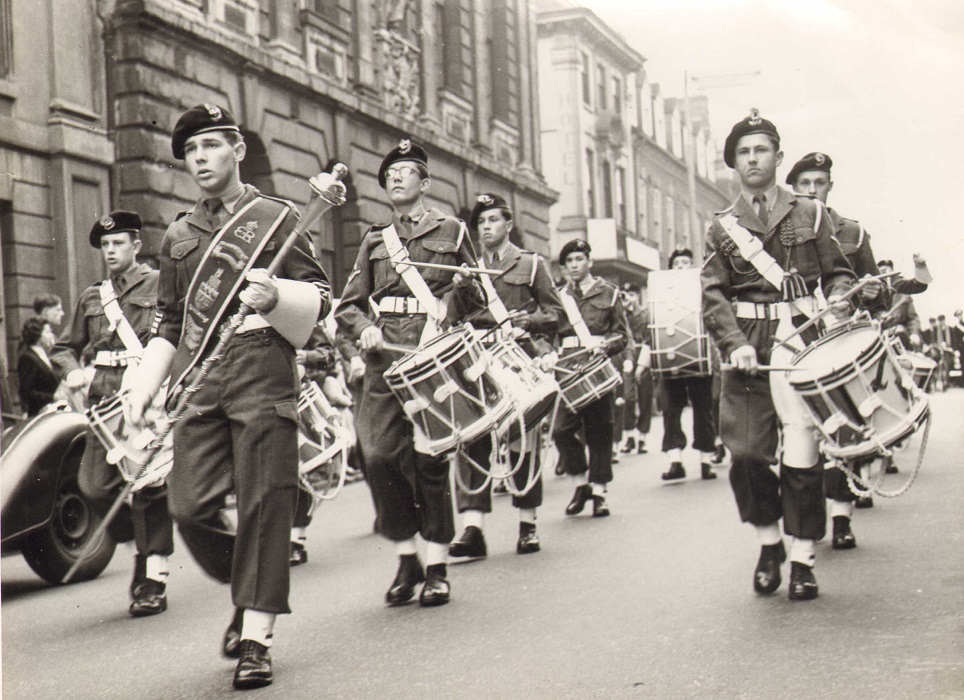 Graham Leake (WS 1948-55) recalls "carrying the bass drum to St. Mary’s church on a hot, sunny day. I beat it all the way there, while standing on a church parade and all the way back. I was exhausted and drenched by the time I collapsed on my bed.”

In 1968 the Band is once again pictured on Church Parade, marching down Jury Street, with a couple of policemen very helpfully keeping the traffic stationary.  An impressive array of dignitaries is outside the Court House.  The school also “supplied buglers for the Assizes”, as mentioned in a 1955 issue of Portcullis magazine. 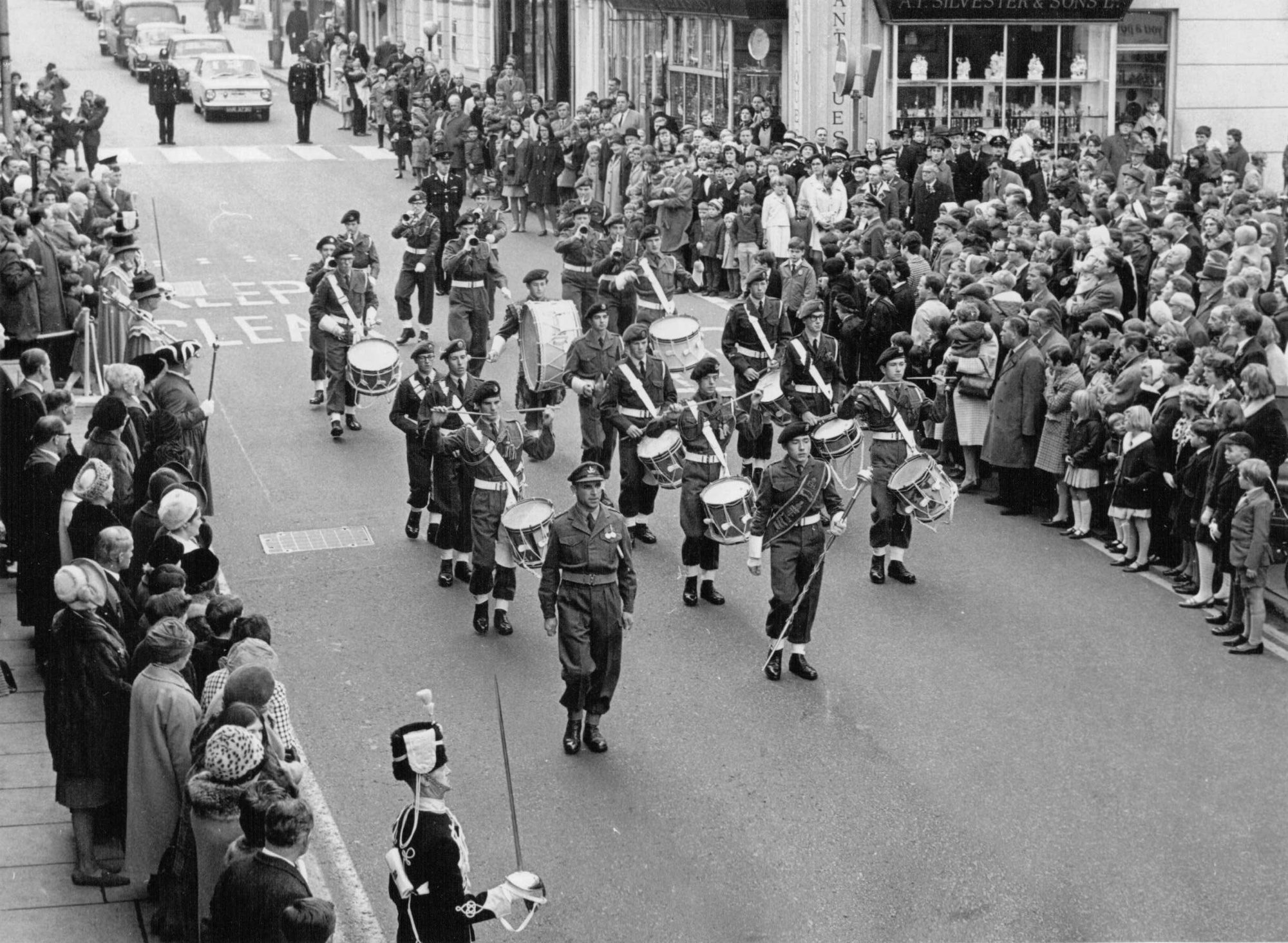 Searching through Portcullis magazines from the 1970s and 1980s for any mention of the CCF Band is a largely fruitless exercise.  I am assured that it still functioned, but in practice was assembled and rehearsed for Remembrance Day, after which all the instruments and drums were packed away for another year.

Steve Walter (WS 1982–89) who played the tenor drum in the Band (“no real skill involved”) recalls: “The Band was assembled at the start of Michaelmas Term in order to rehearse the march from the school up to St Mary’s on Remembrance Sunday.  After the service we marched through the town back to school.  Members of the Band were allowed to wear a white braid in their CCF uniform.  This, I recall, was my main reason for signing up!  I am certain that the last outing of the CCF Band was on Remembrance Day, 1986.  It was my 16th birthday.”

A few Band items have been preserved in the school archives.  We have a couple of bugles, dating from the 1930s, the bandmaster’s sash (probably from the 1950s), a couple of bandmasters’ conducting staffs (the earlier one being very battered), and the carcase of a bass drum.  Formerly hanging in the CCF hut was a fragment of a drum-skin, signed by Field Marshal Montgomery on his visit in 1947, but this has gone AWOL.